Chicks Are Grown Up and Laying Eggs

The Gardenisto | October 28, 2016
Photo Credit: Keith Knoxsville
A Hen and a Drake Green Teal on the truck bed. Not a limit on anything, but a fun morning out.

We lost a chicken this spring, and replaced it with two chicks mid summer so that we can maintain a regular production of eggs. Well the chicks started laying, and at almost exactly 16 weeks. Check out Rosa’s first egg! She’s stoked too. She kept checking it out. We recently renovated the coop, and there is room for a couple more if we really wanted, although 5 chickens is a good number for us. Fortunately the younger girls were eager to integrate with the older hens, and started free ranging on 5 acres with them.

After they feathered out, the young girls were able to get big and strong free ranging with the hens, and hardly required feed this summer. A single 40lbs bag of feed lasted 3 full summer months for two growing pullets and 3 full grown hens. Feed is always offered, but they were filling their crops on seeds, bugs, grasses, and scratch, and had little to no interest in their layer feed.

I’m sure we’ll square up on feed costs when winter rolls in, and the girls free range a whole lot less. OR we can consider the coop costs partially recovered, but getting 2-3 eggs per day from 3 hens, and getting two young ones up to speed for dirt cheap is pretty awesome.

Considering a dozen organic free range eggs cost over 5 dollars. The economics of chicken keeping works for me.

The Gardenisto | October 25, 2016
Photo Credit: Keith Knoxsville
A Hen and a Drake Green Teal on the truck bed. Not a limit on anything, but a fun morning out.

This isn’t a typical Gardenisto post, but I felt like I’d share because it was an important part of my everyday life. I lost my dog and best friend Luna to cancer on Saturday October 22 2016. She was a Catahula Leopard and Aussie Shepherd mix. For anyone who has had either breed, you know how intelligent and incredible they are. Luna was exceptional, even for an already exceptionally intelligent breed. My sister brought her home to my folks place from an adoption center in California, and she immediately became my best friend. Working from home, programming and developing software, meant I got to spend every day with my best friend. Only more recently, by collocating in Wyoming for the last two years, have I really had to spend any time away from her. Besides distance from the rest of my family, its been the hardest part of being away from California.

She was always upset when I left, and resentful for a short while when I got back, but would always forgive me and we’d be best buddies again. I felt guilty and depressed every time I left.

Its taken me a couple days to post this, even though I knew it was only a short matter of time before I’d lose her. I thought I was mentally prepared, but it still hurts. I’m not sure of too many things I can do to honor her memory. I’m not sure how many people understand what its like to loose a dog and companion like her. She was not a pet, she was a friend. I’ve had other dogs, and they were pets. Luna thought she was people, acted like people, and so we treated her a lot like people.

I decided sharing my loss with my internet followers, readership, and friends might be a good way to share her memory, if not just help me vent a little. I’m deciding on which framed picture of her to put somewhere around the house in Wyoming, because I still like seeing pictures of her; even if it does make my stomach sink, my throat hurt, and eyes tear up.

I have tons of great memories, but I also feel robbed of at least a few more years of memories. I already miss her very much. I’m depressed and really just devastated.

The Gardenisto | October 11, 2016
Photo Credit: Keith Knoxsville
A Hen and a Drake Green Teal on the truck bed. Not a limit on anything, but a fun morning out. 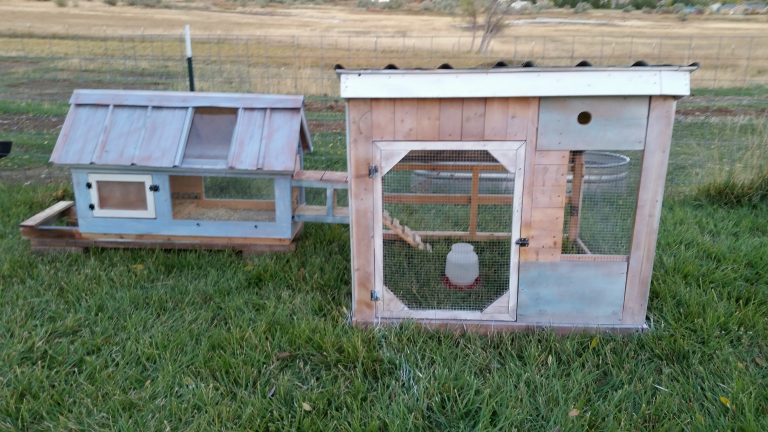 Although I was happy with the look and engineering of my quail coop, I still had a major drawback. Odor. The quail would would get water on quail feed that they had scattered on the floor and the coop would end up smelling bad enough to annoy me. I decided to let them have a run outside for food and water, and the coop purely for warmth and protection. I prefer to let the quail have a more natural habitat anyway, and I want them to maximize sunlight in winter. The result is happy quail that spend time outside when they would like, but can get shelter, warmth, and dust bathe inside in pine shavings when they want to escape the elements. The run is 4 feet by 4 feet, and about 4 feet tall with a steep roof for snow loading. It is wrapped in 1/2 inch hardware cloth, and has a large door for ease of human access. A small 2 foot bridge connects the run to the coop. The coop is 1.5 feet by 4 feet, with a steep roof, a door, and 2 large plexiglass windows. The coop also has a hardwired bulb for warmth, and the quail water will utilize a thermostatic heating element to keep from freezing. I also did a little faux painting with rattle cans to turn my donated green metal roof into a more aesthetically appealing rustic tin color. I also painted, stained, and white washed the coop and run. It looks a little like a child’s doll house now. No the craftsmanship is not shoddy, its simply reclaimed lumber made to work for my application.  So if you seed odd cuts and shapes, that is why.  Leave a comment, an let me know what you think, as well as any other suggestions for quail keeping.