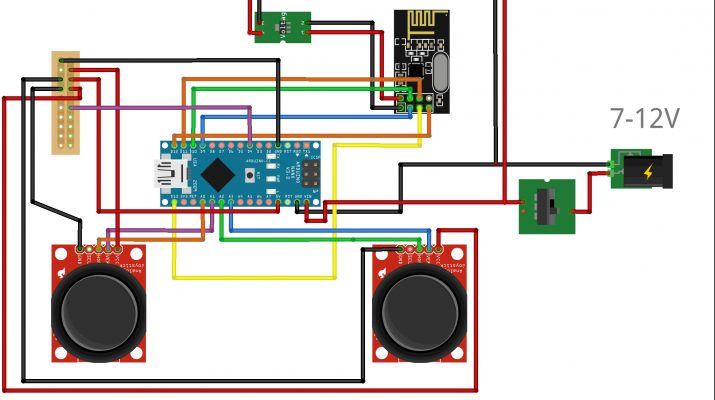 In this part of the DIY drone/quad build, we are working on a transmitter. It would have been nice to have an R/C transmitter and receiver on hand, but I didn’t so I put one together from parts on the build sheet from Part 1 of these posts.

I mounted everything to a sheet of plexiglass, but you could use any easy to shape material. I plan to place all my components inside a 3d printed case, but that’s another post.

The parts we’ll use are (1)Arduino Nano, (1)nrf24 module, (1)Battery Holder Or Battery Pack, (2)joysticks, (1)3.3v regulator, and a handful of jumper wires, or you can solder everything together. I also held some things in place with zip ties while prototyping. Adding a switch is optional if you use jumper wires. My prototype on/off switch was a matter of plugging in the power wire to the Arduino VIN pin.

Here is the wiring diagram for the transmitter. We’ll upload and test code via the Arduino IDE later. What are we doing?

Need to step forward or backwards? Use the links for the build series below: